Series 3 of Goalmouth kicks off tonight at 5.30pm on Disney XD, with Shift 4 involvement from the development stage… Read More

It’s the buzz phrase of the moment but are you or anyone you know asking “Erm….what actually is 4K?!” Here’s… Read More 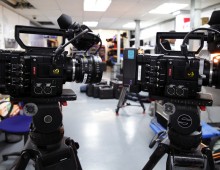 The F5 and F55 are relatively new to the market and subsequently we’re asked a lot of questions about their specifications.