The Making of ‘How Are You, Really?’ For UNICEF

Josh Williams is a British Director of Photography. He’s shot commercials for big brands such as Tag Heuer, L’Oreal and GQ, as well documentaries, shorts, and campaigns.

Shift 4 have been working with Josh for years and we were excited he wanted to use the KOWA Prominars to shoot his latest UNICEF campaign highlighting the stigma mental illness places on a family.

We talked to Josh about his creative and technical process approaching the project, and the choices he made to give the audience an impactful experience of the pressure mental illness puts on the individual.


In his own words, Josh told us:

The campaign for UNICEF was aimed at inspiring people to break the stigma around mental health, and hopefully encourage decision makers to invest in mental health issues to support young people and families. My part in the campaign was to work with British spoken word artist, Taz, to create something engaging and powerful that functions as the spine of the campaign. Technically, the brief was similar to a music video, so I had to pick a location that suited that kind of look.

I found an empty car storage warehouse with a symmetrical ceiling and a criss-cross metal floor. This was perfect as it looked like Taz was trapped in a tiny area within a massive space, which really expressed the impact of mental illness.

There was a feeling that Taz had lots of unknowns around her, like dark corners, which was something we could emphasize with moody light. I also had a set build of a narrow corridor to make Taz feel closed into her thoughts, and we went with an endless blackness in the doorway behind to signify the demons at the back of her mind.

Finding the right lens for the project was essential as I needed something super wide that’s uncomfortably close, as well working far away to give the feeling that Taz was under pressure, but small in her feelings. I also wanted something around the 50mm mark that would be complimentary for closer shots.  When choosing lens sets, they have to suit the brief. There’s no use in having dreamy vintage with quirks and lens distortion on a clean, precise commercial, vice-versa you don’t want clean overly sharp optics on something other worldly.

In the end I chose the KOWA Cine Prominars because of their stunning capabilities.

The scene we were capturing was already quite high contrast and I didn’t feel the need to add any more contrast with a lens, and the Kowa’s were the right choice for this look. They have a sharpness to them which is great because I was always going to be using Bronze Glimmerglass to soften the skin and bloom my highlights. 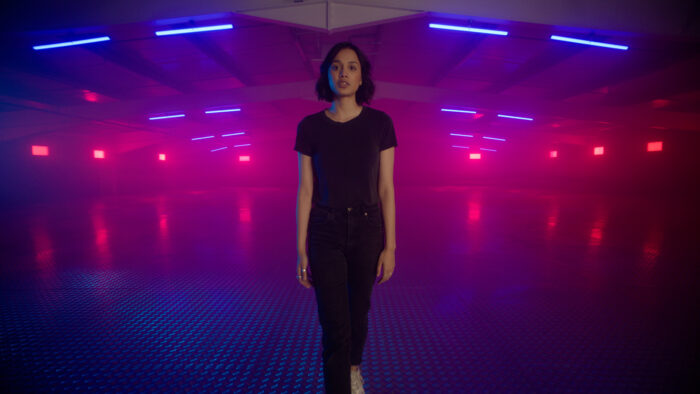 I used the Prominars fully open and a T2.3 stop gifted the perfect amount of shallow making for a beautiful drop-off. The 15mm being a T4 didn’t seem to make too much of a difference as it was super shallow for a wide angle, I would definitely say it’s the best wide-angle lens I’ve shot with – the distortion is insanely minimal for something so wide. It will be my go-to wide lens from now on.

I knew the camera would be constantly moving for this shoot, which is why we shot on Alexa Mini and Movi Pro, so I really needed a lens set suited to gimbal and Steadicam work. The Kowa Cine Prominars worked perfectly as they’re super small and lightweight. My top-tip would be to plan for the 20mm and 25mm to be balanced quite differently as they do have some weight and length to them, for me that meant a couple of counterweights on the Movi Pro which was totally worth it! 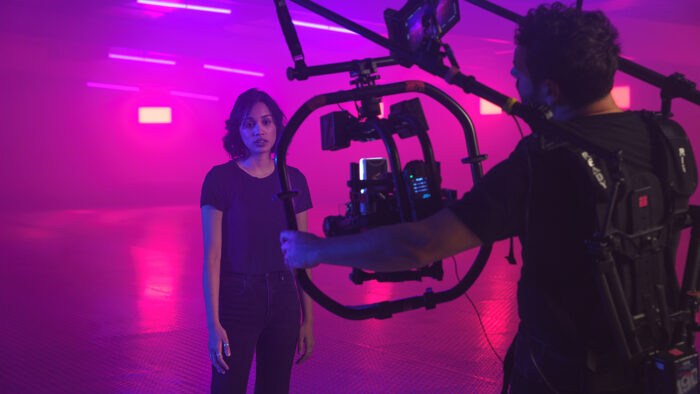 UNICEF was aiming the campaign at a young audience, which was vital in my creative approach to the project. Content for this audience is colourful and dramatic, so we needed to match that kind of content to catch their attention on social media. Because of this, I chose colours referencing the globally popular show Stranger Things in my palette, lighting with a deep red background and a cool blue foreground. As blue is also the colour in UNICEF’s logo, this approach paired up really well.

We had 12 ARRI SkyPanel’s on the sides and back shooting red into the arena, and then set up 16 Astera tubes running blue in the ceiling, as well as an Aputure C600D with blue gel running the side/foreground light, My own trusty Hudson Spider worked as the key light.

Please enable or disable the cookie categories below according to your preferences, clicking 'Save & Accept' to finalise.
Necessary Always Enabled
Necessary cookies are absolutely essential for our website to function properly. This category only includes cookies that ensure the basic functionality and security of the website. These cookies do not store any personal information.
Marketing
Marketing cookies may sometimes be used to help us provide you with information concerning our products and services on third-party partner platforms such as Google or Facebook. They store information about user interaction with our advertisements so that we might better tailor our products and services to their requirements. These cookies do store personal information. The display of such advertisements is not controlled by our website settings but the 'Marketing' cookie preference control can be used to determine whether or not our site is allowed to interact with the cookies which they set.
Analytics
Analytics cookies are used to help us better understand how users interact with our website so that we might improve their experience. The '_gat_gtag_UA_' cookie is only written when 'Marketing' permissions are also enabled.
Functional
Functional cookies help to provide additional personalised functionality to our users, such as the maintaining and communicating of an equipment 'Wishlist'.
Save & Accept