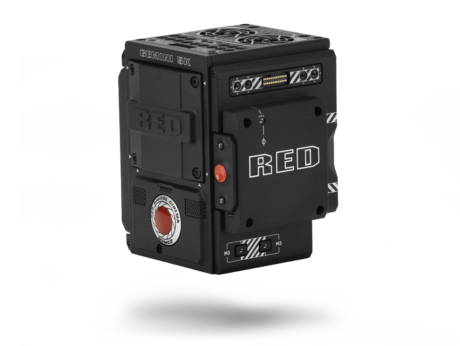 The RED Gemini boasts a 5K s35 sensor with dual ISO, making it suited for low light shooting. The DSMC2 style body is small and compact allowing it to be built into any configuration required and all with REDs versatile RED Raw recording for high-quality files for grading at flexible data rates.

NOTE: This guide is applicable to v7.1 and v7.2 firmware.

The DSMC2 GEMINI® features the GEMINI 5K S35 sensor, RED’s highest-sensitivity sensor to date. The DSMC2 GEMINI is a powerful, dual sensitivity camera that offers the ability to shoot in either Low Light or Standard modes. The DSMC2 GEMINI offers cleaner, less-noisy images in low-light conditions as well as improved performance in shadows.

As a member of the DSMC2® camera lineup, the DSMC2 GEMINI benefits from the advanced modularity of the RED ecosystem. The camera features cable-free peripherals, integrated mounting plate, wireless control, and compatibility with a growing number of DSMC2 modules and accessories. The DSMC2 GEMINI also supports interchangeable OLPFs and lens mounts—empowering you to make the most of all of your S35 compatible PL, Nikon, Canon, and Leica lenses.

This guide is for the DSMC2 GEMINI only. This section introduces the imaging capabilities and advanced features of the camera system. For information about other cameras, go to RED Downloads.

NOTE: The camera itself does not have a DC IN power port. A port expander or power module is required to power the camera. To construct a working configuration for any camera, RED recommends an expander, battery, lens mount, display, and media.

READ BEFORE YOU SHOOT

Read this operation guide carefully and in its entirety before assembling or operating your camera or other RED accessories. In addition to this document, RED offers the following operation guides for the camera system:

All videos and frames are recorded to the R3D® file format. The R3D file format was developed by RED to provide an efficient and manageable RAW video data format that promotes advanced post production editing capabilities. In the R3D file format, the digital image received from the sensor is formatted as a pixel-defect corrected (but in all other aspects unprocessed) 16-bit per pixel RAW data frame. Each RAW frame, or sequence of RAW frames in a clip, is compressed using a proprietary wavelet based REDCODE® RAW compression, then stored to a RED MINI-MAG®.

RAW data is recorded independently of any RGB domain color processing such as ISO, White Balance, or other RGB color space settings. Instead, color parameters are saved as reference metadata; that is, color is not burned into the recorded RAW data. This recording technique promotes flexibility in RGB color processing, which can be deferred to post production or adjusted in the field, without affecting the recorded RAW data image quality or dynamic range.

REDCODE is a visually lossless, wavelet-based compression codec that reduces R3D RAW files into a manageable size, allowing longer recording times on media. The ability to compress RAW data is one of the significant technologies that RED has brought to the industry.

NOTE: REDCINE-X PRO® can create and export .RMD “Look” files which may then be imported as camera monitor path color processing presets. This information is stored as reference metadata, so that these color processing choices can be the default values used in post production. For more information, go to Looks.

SHOOT FOR VIDEO AND STILLS

High resolution video, such as the digital footage captured by the camera, has surpassed the detail necessary to produce professional full-sized prints. Because of the ability to record at high frame rates and resolution, the camera is ideally suited to capture video and still images, simultaneously.

The camera is equipped with a Stills mode that makes it easier to capture stunning images. With presets optimized for stills and Swipe-Up Shortcuts for the RED Touch display, switching from Motion mode to Stills mode is seamless. Using REDCINE-X PRO, or other editing applications supporting the RED SDK, you can pull full resolution still images from R3D files.

The following programs can be used to open and/or edit R3D files:

REDCINE-X PRO is a professional one-light coloring toolset, equipped with an integrated timeline and a post effects software collection that provides the ideal environment to review recorded footage, edit metadata, organize projects, and prepare your R3D files. Use either REDCINE-X PRO or a compatible third-party non-linear editing (NLE) application to edit R3D files.

HDRX® extends dynamic range up to six (6) stops by simultaneously capturing two (2) images of identical resolution and frame rate. The first image is a normally exposed track (A-track), while the second is an underexposed track (X-track) with an exposure value that reflects the additional stops of highlight protection. These tracks are “motion-conjoined” during recording, leaving no time gap between the two (2) exposures. This is different from traditional alternating exposures, which have small gaps between tracks, producing unwanted motion tracks.

MAGIC MOTION is a post production method that combines two (2) HDRX tracks to create an image with both natural motion blur (from the A-track) and sharper reference (the X-track). MAGIC MOTION produces an image with an extraordinary dynamic range that is not available with any other motion capture camera.

Shooting at 24 fps with a 180° (1/48 sec) shutter on traditional film or digital cameras produces motion blur throughout, which is not the way the human eye observes motion. For example, ask someone to swing their arm. What you would observe in a traditional recording of this action is constant motion blur until the arm stops. However, what your eye sees is both motion blur and a sharper reference of the arm throughout the motion path. MAGIC MOTION creates an image that matches the natural motion observed by the human eye.

The following resources offer additional information about RED, the DSMC system, and the RED community:

Hire a RED GEMINI DSMC2 5K from us and you’ll find the following included: