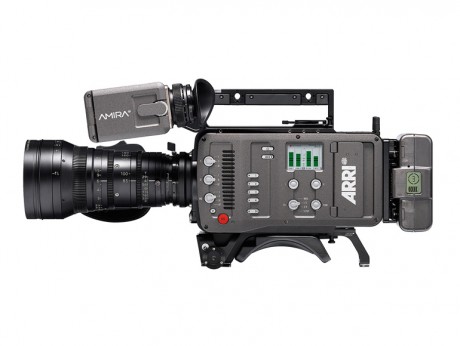 The ARRI Amira uses the same Super35 sensor as the ARRI ALEXA but in an ENG style shoulder-mounted camera suited to documentary style shooting.

The ARRI Amira expands ARRI’s digital camera offering into ENG and documentary style production. It combines exceptional image quality and affordable CFast 2.0 workflows with an ergonomic design optimized for single operator use and extended shoulder-mounted operation. Ready to pick up and shoot straight out of the camera bag, the ARRI AMIRA is hardy enough to take anywhere.

The ARRI Amira represents a seamless continuation of this tradition. It features the exceptional look of the ARRI ALEXA sensor and puts it into a lightweight and compact body designed to be ready for production right out of the box. Since the ARRI AMIRA’s sensor is the same as that of the ARRI ALEXA, you’ll get 14 stops of dynamic range, fantastic skin-tone rendition, a native ISO of 800 and EI range from 160 to 3200.

Recording in ProRes formats up to 4:4:4 in HD and 2K modes with frame rates up to 200fps allowing slow motion, the ARRI Amira includes all the standard frame rates of the ARRI ALEXA in addition to some interlaced frame rates (59.94i and 50i) which are necessary in some broadcast applications.

The ARRI Amira boots up quickly and can be used with no setting up, no rigging and no delays. Ready to record in the time it takes to lift it from bag to shoulder, it’s perfect for unpredictable shooting. The menu system of the ARRI Amira reflects the simplicity and ease of use of the ARRI ALEXA. Assignable buttons and dials are at easy reach. Integrated, motorized ND filters (with 0.6, 1.2 and 2.1) and zebra and false colour tools help exposure control, with advanced peaking making for fast and accurate focusing.

The ARRI Amira is easy to balance on the shoulder with a specialised dovetail system, whatever the combination of lens, microphone, accessories and battery is in use. It’s also designed to snap into a quick release tripod adapter plate.

The ARRI Amira boasts an innovative multi-viewfinder making life easy for a single operator by combining a 1280×1024 res OLED eyepiece with a fold-away 3.2” LCD monitor that displays live images when the eyepiece is not in use. It also provides full access to camera functions without having to remove the ARRI AMIRA from the operator’s shoulder. It also features a tally light.

The ARRI Amira records four channels of 24-bit 48Hz audio and features two XLR 3pin outputs with mic, line, phantom power and AES3 support. There is also one XLR 5pin input with stereo/mono mic inputs, line inputs and phantom power options. The camera can be fitted with an ENG style attachable microphone and has a side panel dedicated to audio levels which can be accessed from the camera right side minimizing disruption to the operator or set directly to Auto Level.

The ARRI Amira is designed to be rugged and reliable with a solid internal skeleton that guarantees camera and lens stability. Sealed electronics provide top level protection against humidity and dust, while an integrated thermal core results in highly efficient cooling.

The ARRI Amira is particularly well suited to productions for which hand-held camera work and single operator usability are key factors, so is invaluable for documentary style work. Reportage and unscripted programming, promotional and corporate films, commercials and low budget features or dramas will also find the ARRI Amira provides both spectacular image quality and value.

For more information on the Amira please visit the ARRI website

Hire an ARRI Amira from us and you’ll find the following included: